Philately is a occupation without social and geographical boundaries that not only entertains but also teaches through the performances of stamps.

The fact that each country publish different stamps, from the beginning led many people to search and gathering as many of them as they could.

Their small size makes it easy to collect and placement (usually in special albums) and encourages correspondence with people from different parts of the globe.

The museum's us there are 3 themes:

The term Navigation (Navigation) is used in the navy and maritime area usually with the following three meanings: 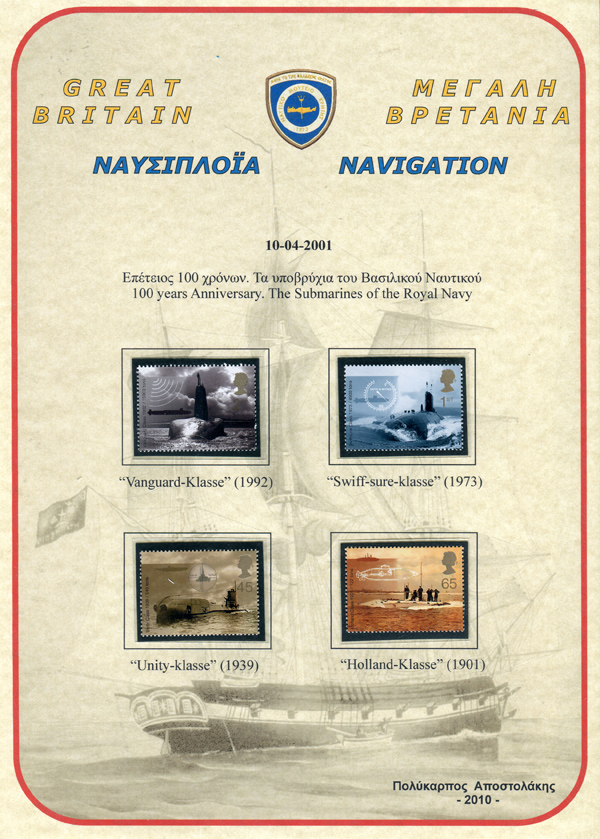 By this meaning navigation is the science and that the technique which ensure the safe handling of the ship. Includes a set of rules and professional knowledge necessary for this purpose. This concept coincides with the first match of the term shipping, which is also the predominant.

2.–As carry out cruising: By this meaning navigation is identical to the sea-or Water-.

The Egyptologists find that the representations (illustrations) for oared vessels found in Egypt, must have taken place around the year 3000 BC Pictured with 20 rowers and a load of cattle on them.

The Phoenicians in the Mediterranean resulted in the largest shipbuilding development. With sophisticated (for the time) ships crossing the Mediterranean carrying large loads to points. Rightly regarded as the first naval people of antiquity.

For Hellas we know that the Cretans were proud and worthy seamen. The Homeric epics out of the inscriptions and related performances during the Trojan war, Greek ships without deck.

During the Roman era, shipbuilding art made new progress. The movement of large Roman galleys were rowing by chained slaves. While the Nordic countries, Norway - Denmark - Sweden, the Vikings had developed wonderful waterways with huge ships.

At the time of the Crusades, ships with square sails and the Cross in the middle crossing across the Mediterranean. Venetians, Spaniards and Portuguese were now Seafaring peoples.

After the Renaissance opened new horizons in the European waterways. Begins the saga of discovery together with the construction of iron ships with sails and also shows the steam which has brought a revolution in the development of ships. Tested in 1802 and 1907 Fulton put in motion the steamer Claremont (the Savvani was the first).

At the beginning of the 20th century we have the appearance of ocean liners, which connected anymore with certainty and fixed dates the major shopping centers of the globe.

Today nuclear energy is to give a new revolutionary breakthrough in ship traffic and evolution Maritime tends toward a bright future with many pleasant surprises.

Lighthouses of the World

When the Hellenic Nation was under the Turkish yoke, was not able to be able to edit the lighting of coasts and for this reason at that time there was darkness on the coast of the Peloponnese and the Aegean islands.

The 1829 is about the lighthouses date key, as then lit the first beacon of the newly established Hellenic state located in the port of Aegina, where it became the capital of the Hellenic state by Kapodistrias.

The next beacon worked, reportedly dated the year 1831 in the harbor of Spetses and a third port of Agios Nikolaos in Kea.

A few years later, in 1848 operated the lighthouse on the island of Psitallia and immediately after another one at Cape Fassa.

During annexation of the Ionian Islands were added and another 18 lighthouses, of which the 14 had installed the English.

Putting lights in inaccessible places of Hellenic seas was difficult until the moment Implemented Swedish invention of automatic headlights AGA that after lengthy testing allowed the lighting and these points.

Thus, we arrive at the year 1934, when the Hellenic lighthouses network consists of 331 flares of which 32 torches were installed by French company «ASMINISTRATION GENERAL DES PHARES DE L 'EMPIRE OTTOMAN» on the shores of recovered new areas.

The number of lighthouses that were operating in 1940 reached 388, while 206 were under surveillance. The release, however, found the Hellenic lighthouses network totally destroyed with only the 28 torches to be longer in operation.

A good effort to restore the lighthouse network began in 1945, where within a decade torches operating was already 500, while 82 of them were Monitored.

Since then the Hellenic lighthouses network increasingly growing, having come to nowadays has about 1400 lighthouses and beacons 150.

Collection on wealth in the marine environment hosted on the premises of our museum.