The model of the Venetian city of Chania is surrounded by rare material of the Ancient, the Medieval, and Modern History.

Coins of Roman, Byzantine and Medieval times, as well as lead seals of the Byzantine Empire and Medieval Europe stand out of the exhibits. Maps, Venetian trade agreements, property titles of important personalities of the Ottoman Empire. 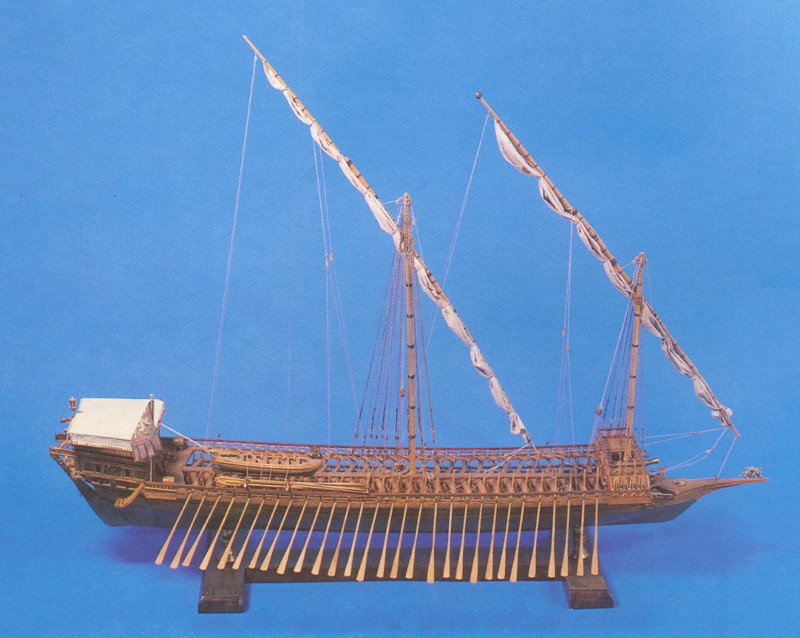 A ship clearly made for war, the "Queen of the Fleet" of the Venetians. It dominated the Mediterranean sea from the 13th to the 18th century, inaugurating the shipbuilding of sailing ships with firearms (2-5 at the bow). Primarily a rowing ship (220-260 rowers). Permanent features: 1. Lack of a deck. 2. the peripheral wooden crate, 3. the narrow corridor and 4. the superstructures in the bow ("rambada") and in the stern ("cassaro"). 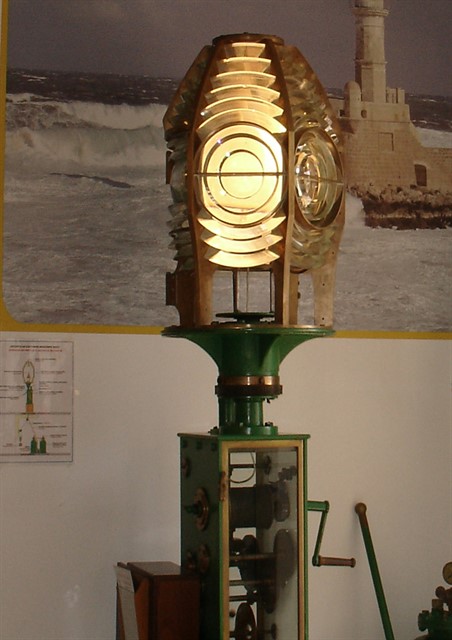 The Lighthouse of Chania is located in a Venetian building on the breakwater, dated back to 1570. It was restored during the Egyptian occupation (1830-1840). Essentially, it was first operated in 1839 while a French company assumed responsibility for its operation in 1864, when the lighthouses of Rethymno, Drepano and Souda were also built. Energy source of the time was the light oil and its feature was three flashes and glow of 20 miles. For the operation of the lighthouse it was necessary to have a guardian who at sunset turned on the lighting system and "wound" the drum around which the rope was wrapped, hanging the counterweight to activate the rotation system. The rotating crystals created blinking by magnifying the focus. The light source was a luxe lamp which was powered by a supply of oil and turbulent air with a lever integrated in the fuel bottles.

Since antiquity the island of Crete has been an “apple of discord”, a prize coveted by all those, at various time, aspired to commercial and naval domination of the Mediterranean. Its crucial geographic position – situated as it is between three continents – made it an important “transit station” for Eastern shipping and a valuable “naval base” permitting the control of the wider area. Obviously, for the same reasons, it attracted the vivid interest of geographers and cartographer. The first known representations of the island refer us to 2nd century AD and to work of the great Alexandrian geographer and cartographer Claudius Ptolemaeus, Ptolemy. His Geographical Narration was coped by the Byzantines in the 13th-15th century and served as a manual for the teaching of geography.

In these Byzantine manuscripts we encounter for the first time a depiction of Crete (albeit seriously distorted in its contours), executed on the basis of its geographic coordinates. In a similar manner – in the shape of a large rectangle, with a deep bay on its northern coast- we find also in the famous Tabula Peutingeriana, a medieval reproduction of Roman road map, the composition of which scholars place chronologically somewhere around the middle of the 3rd century AD. And as Crete continued to be a trading centre in Roman times, not only had the cartographers included the island in the map but he had also marked 17 revictualling stations – places, that is, where the traveler or soldier might rest and provide himself with whatever her needed for the continuation of his journey.

Until the Middle Ages, the shape in which the island was depicted differed greatly from its actual form. From the 13th century on, however, when the compass came into use and when the mariner’s chat, the portolano appeared, on which were described the shores, drawn the outlines of the coasts and marked the points where the voyager might disembark and reprovision himself with water, the contour of the island underwent a relative change. Besides, already in 1211, Crete had come under the dominion of the Republic of Venice and had become an important link in the chain of the Serenissima’s possessions. The “hecatompolis” of Homer was now a very important station for the import and export trade of the greatest naval power of the time: Candia, as Crete was named by the Venetians, assumed the title of “Kingdom” (Regno di Candia) although that was not the regime under which it was governed, and her renown spread to the ends of the earth. In the centuries that followed, and while the voyages of discovery changed the image of the then known world, the importance of her political and economical role grew even greater. Which is why, in the planispheres, in the collections of nautical charts, or in the separate maps of the world adorned with beautiful miniatures, colorful wind roses and delightful depictions of winds, in the drawings turned out at a feverish pace by the cartographers, we can almost always make out the shape of the island, its outlines endeavoring to approach the geographical reality.

Towards the beginning of the 15th century the first Isolaria appeared, a new and peculiar literary form, of mixed content, which delighted the reading public of Western Europe. It consisted of travelers’ tales accompanied by maps of the regions described. In these works, Crete is always a focus of interest. Thus, in the works of the Florentine monk Cristoforo Buondelmonti, the Liber Insularum Archipelagi 1420 and the Descriptio Insulae Cretae (1415), we find the first modern maps devoted entirely to the island. The same occurs in later Isolaria which derive from those of Buondelmonti; namely in the Insularium Illustratum (1470-1480) by Enrico Martello, the rhymed Isolario of Bartolomeo dalli Soneti (1485) and that, also, of Benedetto Bordone, Libro de tutte l’ Isole del Mondo (1528).

We are now in the age of printing. The invention of mechanical typography has brought about radical changes in the conditions of map-making. The cost of reproducing maps has dropped considerably and the circulation of such works has increased spectacularly. Henceforth, and until the end of the 18th century, the period, that is, of the flowering of printed cartography, Crete will occupy a prominent position in the works of European mapmakers. The most important cartographers’ workshops devote monumental maps to the island, drawing it independently from the rest of the geographic space of Greece and adorning these ever more accurate representations with lavish embellishments. Even after its final occupation by the Turks in 1669, maps of the “Island of Zeus”, as the cartographers very often called it, continued to be included in the finest atlases of the time and to flood the European market – not surprisingly, considering the island’s fame and the fact that the Ottoman Empire had granted special trading privileges in the region to France, Holland an England.