Anniversary Event for the Union of Crete, Sunday 01 December 2019

Anniversary Event for the Union of Crete, Sunday 01 December 2019 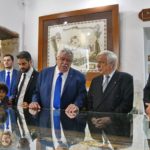 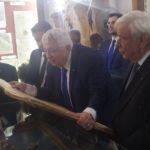 In celebration of the 106th anniversary of the Union of Crete with the rest of Greece, anniversary events were held. In the early hours of Sunday, December 01, 2019, at the end of the doxology at the Holy Metropolitan Church of Chania, the President of the Hellenic Republic held the Greek Flag at the Firka Fortress. Afterwards a visit was made to the premises of the Maritime Museum of Crete, where the President of the Museum, Mr. Emmanouil Petrakis, the Board of Directors and the Staff met the President of the Hellenic Republic Mr. Prokopis Pavlopoulos and the other visitors. During a brief visit, the President of the Museum presented the new exhibits and read some pages from the diary of the Chania Port Governor George Kourkoutis, providing important information on the events of that time.