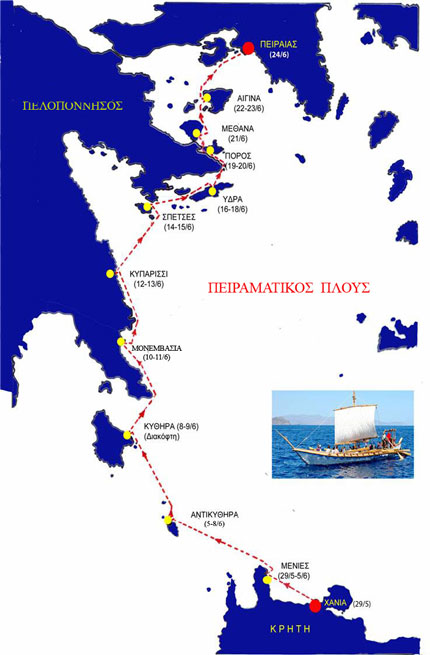 The main target of the experimental trip was to prove that the constructed ship was not only well constructed but also navigable so as to test in practice the correctness of the entire research approach.

The designing was based on the data of the Minoan period.

- Trip only during day time and close to the coast.

The crew of the ship consists of 24 volunteers (young men and women) coming mainly from Crete . They were separated in two crews so as to alternate during the trip.

After the necessary training of the crew the ship sailed from the harbor of Chania on May 29 th 2004.

The sailing was celebratory and many people in different ways wished farewell to MINOA while many boats escorted it to its first trip. The most difficult part of the trip was that of Menies- Antikythira- Kythira- Monemvasia

At the intermediate stations the habitants welcomed warmly the ship, they organized festivals to honour the crew and hosted the crew during the nigh. The Hellenic Navy had offered a minesweeper as an escort ship, for the whole trip

a.  The crew corresponded totally to its mission proving its body and soul strength.
b. The ship corresponded even under difficult weather conditions confirming the correctness of this experimental naval approach.
c. The achieved speed using paddles was 2.4 knots. Using paddles and sail was 3.2 knots. 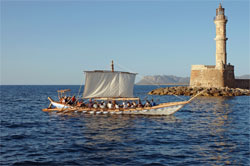 In this way the program of the reconstruction of the Minoan ship was completed after following the below mentioned stages: Study- Theoretical Documentation-Shipbuilding- Practical Documentation (Experimental Trip).